Research team at TWINCORE, with international collaborators, clarifies why mice are not susceptible to infection with hepatitis C virus 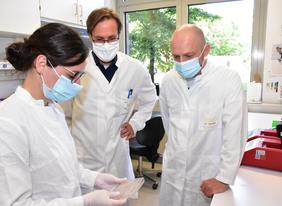 Scientists at TWINCORE have succeeded in identifying two factors that protect liver cells of mice from infection with the hepatitis C virus (HCV). These are Cd302, a lectin, and Cr1l, a complement receptor-like protein. The research outlined in this study lays the foundation for the future development of a mouse model for HCV vaccine research. The results are published in the journal Science Advances.

HCV remains a global health problem in 2020. The World Health Organisation (WHO) estimates that around 71 million people worldwide are infected with the virus. Infections often remain undetected because they rarely cause severe acute symptoms. However, serious damage to the liver, such as cirrhosis or hepatocellular carcinoma, occurs as a late consequence and results in 400,000 deaths per year. The infection is now treatable and can be cured. But the drugs are expensive, and they are usually not readily available to people in developing countries without comprehensive healthcare systems. An effective vaccination against HCV has not yet been developed. This is partly because there is no small animal model for pre-clinical safety and efficacy testing of potential vaccine candidates.

Humans are the only natural host of the hepatitis C virus. Mice, in contrast, are not susceptible. Only genetically modified mice, which carry the human entry factors for the virus, can be infected experimentally if the mechanisms of the cells' virus defence are also inactivated. Despite this, the virus barely reproduces in the modified mice and no chronic infection occurs. "The reasons for this were not exactly known", says Prof. Thomas Pietschmann, Director of the Institute for Experimental Virology at TWINCORE.

He therefore applied for funding from the European Commission in 2012 to get to the bottom of this question. Equipped with an ERC Starting Grant of 1.5 million euros, Pietschmann recruited a post-doctoral researcher from the UK, Dr. Richard Brown, to design a special cell culture screening system to identify those proteins produced in the liver cells of mice that prevent HCV from replicating. This system identified two restriction factors, Cd302 and Cr1l, which are present on the cell surface and also associated with intracellular membranes.

"In the mouse, the two factors are constantly expressed in the liver," says Brown, who now runs his own lab at the Paul Ehrlich Institute (PEI) in Langen. "In contrast to most other known restriction factors, they also function independently from the interferon system". This is the cell's own immune defence, which is activated when viruses infect a cell. Together these two mouse proteins are sufficient to dramatically reduce the proliferation of HCV in human liver cell cultures when they are artificially introduced.

To further characterize the identified restriction factors, the TWINCORE scientists sought support from national and international colleagues: In addition to several colleagues at the Centre and partners at Hanover Medical School and Helmholtz Centre for Infection Research in Braunschweig, the two founding institutions of TWINCORE, experts in England, Belgium and the USA helped to make the research project a success. Over 40 authors from more than 20 different research institutions contributed to the publication, including this year's Nobel Prize winner Prof. Charles M. Rice. "In Prof Rice's laboratory at Rockefeller University, New York, they investigated whether viruses derived directly from HCV infected patients are also susceptible to restriction by Cd302 and Cr1l," says Brown. "Prof Rice’s team also tested if the restriction factors act on other related flaviviruses and Hepatitis E virus."

"Ultimately we were able to show that Cd302 and Cr1l are key factors in the mouse that prevent HCV from entering liver cells. This is an interesting new perspective on liver-intrinsic antiviral defenses. In addition, this information will facilitate development of a mouse model for HCV research," says Pietschmann. Such a model is urgently needed for vaccine research because it would make preclinical studies much easier and cheaper. Although the road to developing a vaccine against Hepatitis C is still long, these findings are a small step in the right direction.