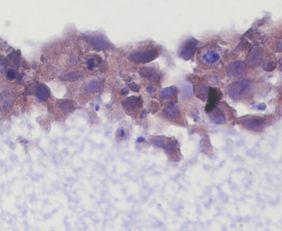 Section of the 3D model of the skin. Integrity of the upper cell layers is disturbed due to the lack of ISG15.

The interferon-stimulated gene 15 (ISG15) plays an important role in the integrity of the upper skin layer. Researchers from TWINCORE, Centre for Experimental and Clinical Infection Research, together with colleagues from Hannover Medical School (MHH), the Helmholtz Centre for Infection Research (HZI), Sohag University Hospital in Egypt and other partners have now investigated this. They have published their results in the Journal of Clinical Investigation.

A skin disease in an Egyptian child has led an international team of scientists, coordinated by Dr Frank Pessler, to the trail of a previously unknown function of the immune gene ISG15. The discovery was made rather by chance after the paediatric rheumatologist and head of the research group Biomarkers for Infectious Diseases at TWINCORE was a visiting professor at the Egyptian university hospital in Sohag.

A boy with ulcers on his skin puzzled the doctors. They could rule out bacterial infections or parasites as cause. Examination of a skin biopsy showed chronic inflammation. This could be treated with cortisone, but extensive scars remained. Later, the patient's sister showed the same symptoms and the doctors suspected a genetic, i.e. hereditary, cause. Back in Germany, Pessler had a so-called whole exome sequencing carried out on blood samples from the entire family in the Department of Genome Analysis at the HZI. "In this process, all active genes are analysed. In both siblings we discovered a homozygous loss-of-function mutation of the ISG15 gene, the children simply lacked the function of this gene," says Pessler.

As a result, the ISG15 protein, which actually plays a role in regulating the interferon system, is missing. "Interferon is released in the body, for example, as the first response to pathogens and leads to inflammation," says Pessler. "ISG15 has an inhibitory effect in this process." If it is missing, uncontrolled inflammation occurs. However, inflammation alone does not necessarily lead to skin ulcers. The researchers suspected that they form in patients with ISG deficiency because a function of ISG15 for skin integrity is also missing.

By investigating three-dimensional stem cell-based skin models at the Leibniz Research Laboratories for Biotechnology and Artificial Organs (LEBAO) and the Department of Dermatology at Hannover Medical School, the scientists were able to gain a more detailed understanding of the role of ISG15 in the skin. Among other things, they discovered that it is involved in the adhesion of skin cells to each other and in migratory processes. "This refers to the migration of certain cell types to their destination," says Pessler. "If there is a disorder here, the cells of the different skin types no longer find their right place." This then leads to lesions such as those observed in the brother and sister from Egypt.

ISG15 deficiency is a very rare disease that has been described less than fifteen times worldwide. Pessler suspects, however, that the number of unreported cases is much higher. "Skin ulcers are more common in warmer regions," he says. "The cause is usually attributed to infections and not investigated further."  “The discovery that in some patients, recurrent or chronic inflamed wounds can be traced back to a relatively simple cause, for instance the lack of ISG15, is highly relevant for us clinicians,” says Prof. Thomas Werfel, Deputy Director of the Department of Dermatology of MHH.

This is especially important because the researchers can already suggest a treatment. In laboratory tests, a combination of ruxolitinib, a drug that inhibits excessive interferon responses, the cytokine TGF-beta and the antibiotic doxycyline, which is used here as an inhibitor of certain enzymes, was able to compensate for the absence of ISG15. "The scarring and the sometimes severe side effects of many years of treatment with corticosteroids can hopefully be avoided in this way," says Pessler.

The treating doctors in Egypt also see these results very positively: "We are very happy about this successful collaboration! There are certainly more children with this disorder, but the correct diagnosis remains undetected. The results will help us to recognise it earlier and to treat the little patients before it leads to scarring or complications in other organs," says rheumatologist Dr Ahmed Elsaman.