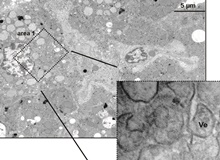 The hepatitis C virus (HCV) infects around 160 million people worldwide. Although there are new therapies, HCV infection is still one of the most common causes of liver transplantation as these new drugs are very expensive and can not be used extensively in poorer regions of the world. Also vaccination against HCV is currently not possible. One of the biggest problems in developing new approaches against HCV is the extremely narrow host range of the virus: it infects only humans and chimpanzees. Researchers can investigate HCV biology in cell-culture, but this approach cannot mimic the human immune system. Consequently it has been very difficult to develop and investigate vaccination strategies against HCV. Scientists at the TWINCORE are now investigating a very close relative of the hepatitis C virus: the "non-primate hepacivirus", (NPHV). This newly discovered viral pathogen infects horses and donkeys and raises many questions that will give new insights about the human hepatitis C virus. In a recent study, published in PNAS, the researchers have focused on immune control of NPHV in its natural host, the horse.

"NPHV is the most similar virus to HCV that we know of." says Dr. Stephanie Pfänder, former scientist at the TWINCORE, now at the Institute for Virology and Immunology (IVI) in Berne. Like HCV, NPHV is also specialized to its host: horses are the natural host of the virus, in addition to donkeys. And NPHV multiplies mainly within the liver – something also shared between the two viruses. However, unlike humans, horses do not appear to get sick after infection. They show no symptoms, or in a few cases mild symptoms, and usually their immune system has eliminated the virus after a few weeks. "In our initial studies on NPHV in 2014, we found antibodies against the virus in a high percentage of the studied thoroughbred horses from a renowned breeding program. This means that many of these horses have already been infected with the virus without that the infection being noticed." says Prof. Eike Steinmann, head of the Virus Transmission group at the Institute of Experimental Virology at TWINCORE. Is the "horse-NPHV" pairing perhaps the long-sought after animal model which can help scientists can develop a vaccine against HCV?

To find out, the TWINCORE scientists Eike Steinmann, Stephanie Pfänder and Stephanie Walter, in close cooperation with the horse clinic, the Institute of Pathology and the Institute of Virology of the Foundation of the University of Veterinary Medicine Hannover infected three horses, which had no antibodies against NPHV, under controlled conditions and collected blood for the analysis of immune cells once a week. "The immune system had eliminated the virus in one case after only one week and in the other two cases after eight weeks," says Stephanie Pfänder. "As we were unable to observe a strong general immune response, we suspect that the defense response of the immune system has mainly occurred in the liver."

With this knowledge the scientists have asked an important: can a first infection with NPHV help to protect against a second infection? "We infected the horses with the same virus strain five months after they had cleared the infections," explains the co-investigator from the Horses Clinics, PD Dr. Jessika Cavalleri. "The horses were protected by their previous infection. The first infection thus appears to be a ‘vaccination’." And the horses were also immune against another variant of the virus, as further infections could show some months later. However, the genetic range of NPHV is far from the broad diversity of HCV- all known NPH-viruses are quite similar.
"These results could facilitate the development of vaccines for hepatitis C," says Eike Steinmann. "For the first time, we are able to investigate a very similar virus to the HC virus in its natural host - which is still able to ward off the virus."