How the body produces an endogenous antibiotic with anti-inflammatory effects 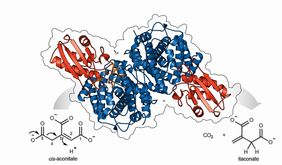 HZI and TWINCORE researchers give insights into itaconic acid synthesis

For a long time, itaconic acid was only known as a metabolic product of fungi. Its function was unknown, but for decades it has been used industrially for polymer production. In 2013, it was surprisingly discovered as an important metabolic product in the immune system. This newly described role has sparked a search for potential clinical applications. Researchers at the Helmholtz Centre for Infection Research (HZI) and TWINCORE, jointly founded by the HZI and the Hanover Medical School, have now solved the crystal structure of the itaconic acid-synthesizing enzyme cis-aconitate decarboxylase (CAD). Their findings provide the basis for an improved understanding of itaconic acid synthesis, the evolutionary origin of this important metabolic step, and the role of itaconic acid in the immune system. In particular, the researchers identified naturally occurring and possibly clinically important variations in the human CAD enzyme.

Produced by activated immune cells, itaconic acid uses two different mechanisms to help the immune system fight invaders. It is an endogenous antibiotic that kills bacteria taken up by certain immune cells. It also acts as a signalling molecule that adapts the cellular metabolism to the immune activation, by attempting to suppress excessive inflammatory reactions. “The crystal structure of the enzyme CAD, which produces itaconic acid, was previously unknown. It could provide us with information why the enzyme activity varies between different organisms”, says Dr. Konrad Büssow, scientist in the Department “Structure and Function of Proteins” at the HZI. The researchers have now closed this knowledge gap and solved the crystal structure of CAD from mice and humans. “Although the enzyme is a decarboxylase, the structure differs greatly from other decarboxylases,” says Prof. Wulf Blankenfeldt, in whose department the protein structure analyses were carried out. “We have only found related structures in bacteria, but they generally lack CAD. It is likely that all of these enzymes stem from an early common ancestor that evolved to synthesize itaconic acid in higher organisms.”

To learn more about the role of itaconic acid in infections and inflammatory processes, the researchers also studied the occurrence of CAD variants in the population. “We hypothesize that mutations that increase the activity of the enzyme provide better protection against the infection with certain bacteria and reduce the risk of chronic inflammations such as rheumatoid arthritis or inflammatory bowel disease,” says PD Frank Pessler, head of the research group “Biomarkers for Infectious Diseases” at TWINCORE. “Interestingly, a particular CAD mutation occurs relatively frequently in populations of African descent. This mutated enzyme is hyperactive. The reason for this could be the co-evolution of mycobacteria, including the causative bacteria for tuberculosis, with early humans in Africa. Thus, the mutation would have been a selective advantage for these people.” The researchers found that mutations that lead to a loss of itaconic acid synthesis are extremely rare. This also suggests that itaconic acid was very important in human evolution, probably as protection against certain infections and inflammatory processes, says Pessler. For the HZI researchers, the elucidation of the CAD crystal structure is an important step towards the future investigation of whether the different enzyme activities can also be a target for future therapies. “With these findings, it will additionally be possible to optimize the enzyme for technical applications and make polymer synthesis more efficient”, says Büssow.