A call for help from the brain

How immune cells are lured to the brain in encephalitis 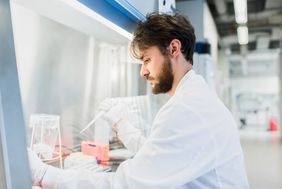 Dr. Luca Ghita, first author of the study, at work in the laboratory © TWINCORE / F. Schmidt

Certain viruses can cause inflammation of the meninges or even the entire brain, so-called viral encephalitis. In addition to the rabies virus and the West Nile virus, these also include the vesicular stomatitis virus (VSV) in the mouse model. The immune cells needed to fight the infection must first reach the brain from the periphery of the body. To do this, the immune system produces messenger substances as attractants. Scientists from the Institute for Experimental Infection Research at TWINCORE have now been able to show that this signalling chain in the VSV infection has its starting point in the infected nerve cells themselves. They have now published this finding in the top international journal "Science Immunology".

Viral encephalitis is a rare but serious disease. It often results in permanent nerve damage caused by persistent inflammatory reactions. As a first defence measure in a viral infection, the cells of the innate immune system release molecules that on the one hand have a direct antiviral effect. On the other hand, chemokines are also produced that attract further immune cells to the site of infection. This is important because the direct antiviral effect of the messenger substances is usually not enough to cure the infection in the brain.

The CD8 T cells are the most important effector cells for fighting viruses. They are formed in the lymph nodes in the body and trained there for their specific tasks. They are lured to their place of action by messenger substances. These are, among others, chemokines that are released by other immune cells, but also by virus-infected cells.

"In the case of a VSV infection through the nose, the viruses migrate via the sensory nerves from the nasal mucosa to the olfactory bulb in the brain," says Dr Luca Ghita, first author of the paper. "We were able to show that the infected neurons there sense the infection and set a signalling chain in motion via an adapter molecule called MyD88. The end result is the release of those chemokines that attract CD8 T cells from the periphery into the central nervous system." Ghita was a PhD student and postdoctoral researcher at the Institute for Experimental Infection Research at TWINCORE and now does research at Stanford University in California, USA.

Remarkably, this signalling chain is triggered by the infected nerve cells themselves. "We were the first to show this phenomenon in connection with viral encephalitis. It's like a call for help from the brain to the immune system," Ghita adds. Until now, it was not entirely clear which cells in the brain VSV infects and how the immune response is triggered.

"It is important that this call for help is also heard," says Prof. Ulrich Kalinke, Director of the Institute for Experimental Infection Research and Executive Director of TWINCORE. "If it goes unheard and the adaptive immune response fails to develop, the inflammatory processes and viral replication can cause severe nerve damage that can ultimately even be fatal."

The improved understanding of how infected cells interact with the immune system could help improve the treatment of viral encephalitis in the future. "The goal is to adapt the immune response against the viruses so that the dangerous inflammatory processes remain under control," says Kalinke.