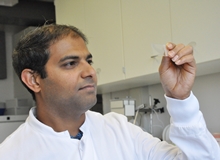 Our brain is one of the most protected organs of the body. The blood-brain barrier, a barricade made of specialized cells, allows only selected substances to pass from the bloodstream into the central nervous system. It also shields our brain from pathogens, toxins and other messenger substances. Nevertheless, like any other security system, the brain also has vulnerabilities. Olfactory sensory neurons, also known as odorant neurons, are among such vulnerable sites. These neurons are located in the nasal epithelium, they are connected with the brain, and they are essential for our odorant sense. Viruses such as influenza virus, tick born encephalitis virus, Dengue virus and herpes viruses can exploit the odorant system to enter the brain. Upon entry of viruses into the brain via this route, the brain becomes inflamed and life-threatening encephalitis can develop as a consequence. Scientists at TWINCORE have uncovered a specific immune response in the brain which is based on completely different mechanisms than the defense against pathogens in the rest of the body. Recently, they published their discovery in the Journal Cell Reports.

“We know that the first line defense in the brain is similar to responses in the rest of the body: Brain cells detect the invading virus and initiate a protective response by producing signal molecules such as interferons. However, the brain is very sensitive to changes in its environment. Immune responses within the brain can cause brain damage that may result in sequelae such as personality changes, epilepsy, or motor disorders”, says Dr. Chintan Chhatbar, scientist at the Institute of Experimental Infection Research. How to help patients with viral encephalitis best without harming the brain is one of the questions TWINCORE scientists are aiming to address.“ In order to better understand the protective immune response within the brain, we studied processes initiated by interferon responses in the brain more precisely.”

The virus enters the body via the olfactory nerve. The individual odorant neuron threads run through a perforated bony plate of the skull – the so called cribriform plate - and reach the olfactory bulb, which is a part of the brain. Within the olfactory bulb, the incoming signals are processed and further guided into the brain. In the olfactory bulb, the first defense reactions against the virus take place: Interferon is produced to fend the viruses off that have migrated up the olfactory nerves and reached the brain. Which cell subsets produce the interferon and which ones respond to the interferon? “Imaging techniques are helping us to track the infection with vesicular stomatitis virus (VSV) – our model virus. In the central nervous system, four cell types are particularly important: microglia cells, guard and cleaning command of the brain; astrocytes, assistant group of the electrically excitable structures of the brain; oligodendrocytes, insulation in charge of the nerve tracts which prevents short-circuits; and, of course, the neurons, the highway of information transfer and storage in the brain. After VSV infection, the immune cells of the brain, the microglial cells, first begin to multiply in the olfactory bulb and afterwards migrate to the source of the infection to eliminate the viruses. If the microglial cells are removed, the brain is no longer able to defend itself against the infection.”

“We know that in the brain mostly neurons and some astrocytes get infected with VSV. Thus, there has to be communication amongst different cells in the CNS in order for microglia to come to infected cells and stop the virus from infecting more cells. “We hypothesized that interferons could be the message used for communication,” says Dr. Chintan Chhatbar. Thus, in order to better understand the intercellular communication that instructs microglia to multiply and migrate to infected cells, TWINCORE scientists studied the role of interferon as a message. Interferon is produced by the cells which detect the virus during viral attack and by this way inform other cells. All the cells which get this message initiate a defensive reaction, which stops virus infection from spreading further. “We switched off the receivers that can recognize the interferon message, the interferon receptors of microglial cells, astrocytes or neurons one by one so that they could no longer receive the message delivered via interferon", says Dr. Chintan Chhatbar. "What we saw was amazing: for microglia it was not necessary to have interferon signal - they migrate and defend the virus in any case. But when astrocytes or neurons no longer have interferon receptors, the microglial cells do not react to infection. They neither multiply nor migrate to the infected cells." Apparently, after perceiving the interferon signal, astrocytes and neurons form specific messenger substances, which induce multiplication and migration of microglial cells. Activation of the microglia requires a very complex and at the same time very secure mechanism, i.e., the interaction among all three cell types. "We do not know yet which messenger substances are directly instructing microglia to multiply and migrate," says Prof. Ulrich Kalinke, Head of the Institute for Experimental Infection Research, "but this signaling cascade might contain the key with which we could support the brain during viral infections. Hopefully, this will help to develop new therapeutic approaches for patients with viral encephalitis to support healing of the brain without harming it."